Barcelona was founded as a Roman city and early in its history it became capital of the Counts of Barcelona. Today it is the capital of Catalonia. It remains today an important cultural center and a major tourist destination and has a rich cultural heritage. It is particularly renowned for its architectural works of Antoni Gaudí and Lluís Domènech I Montaner that have been designated UNESCO World Heritage Sites.

The Barri Gòtic is the center of the old city of Barcelona. Many of the buildings date from medieval times, some from as far back as the Roman settlement of Barcelona. Catalan modernisme architecture, often known as Art Nouveau in the rest of Europe, developed between 1885 and 1950 and left an important legacy in Barcelona. The best known work of Antoni Gaudí, which is here in this quarter, is the immense but still unfinished church of the Sagrada Família, which has been under construction since 1882 and is still on-going.

The city of Barcelona contains 68 municipal parks, divided into 12 historic parks, 5 thematic (botanical) parks, 45 urban parks and 6 forest parts. These range from vest-pocket parks to large recreational areas. The urban parks alone cover 10% of the city. Montjuïc is the largest park, with 203 ha located on the mountain of the same name. It is followed by Ciutadella Park houses the Parliament building, the zoo and several museums.

Barcelona has a great number of museums including the National Museum of Art of Catalonia which possesses a well-known collection of Romanesque art, while the Barcelona Museum of Contemporary Art focuses on post-1945 Catalan and Spanish Art. The city has many venues for live music and theatre, including the world-renowned Gran Teatre del Liceu opera theater and the Palau de la Música Catalana concert hall.

Barcelona is almost as lively at night as it is during the day and it has a unique, exciting atmosphere, which provides the visitor with a truly unforgettable experience. Tourist Information for Spain can be found here, here and here! 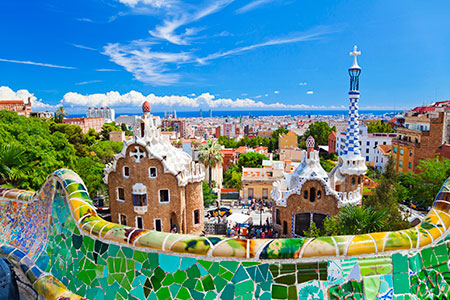